Gentlepeople of the Vox Chaotica Council!

I think it’s about time I set this project to rest. I obviously don’t have the same drive I had back when I started this blog, and I am working on other things which are closer to my heart and are hopefully a little more directed than this turned out to be.

Make no mistake—I love and am very proud of this blog, even with all the ridiculous posts, the insane alt-texts, and the regrettable lack of discipline or rigour in my posting “schedule.” The majority of posts in this blog were made during one of the most happy and productive times of my life, and what a joy it is to be able to revisit those times. Currently, the plan is to keep the blog exactly as it is. Perhaps in the far future I will revisit this place and make some small commentary, or occasionally write some strange post, but for all intents and purposes, this blog’s time has passed and any exception is just whispers from the phantoms on the other side.

If you are interesting in hearing more from me, I am working on a weekly blog called Apologies by Cutter, where I talk through my understanding of things in a more structured way.

Thank you to all of you who came along this silly journey with me (willing or otherwise).

WordPress.com is excited to announce our newest offering: a course just for beginning bloggers where you’ll learn everything you need to know about blogging from the most trusted experts in the industry. We have helped millions of blogs get up and running, we know what works, and we want you to to know everything we know. This course provides all the fundamental skills and inspiration you need to get your blog started, an interactive community forum, and content updated annually.

Gentlepeople of the Vox Chaotica Council!

So between my discomfort with having such a pro-gender-binary welcoming statement, and my sincere desire to not have to type out both gentleman and gentlewoman every time I start a blog post, you have have noticed I changed my greeting. [Editor’s Note: at least it isn’t HELLO EVERBIRDY, Right?]

You may be wondering why I’m talking about Salamanca when I can’t even spell it right. Well, first you have to put your little snooty cap with that flamboyant feather right over there on the hat rack and leave your attitude at the door. Then I will tell you that this is the AMAZING and WONDERFUL Tale of the MIGHTY and BRAVE Salamenca—the Snail.

So this may be rather common in other parts of the world, but in Arizona, most of the wildlife exists because it can somehow be more brutal and angry than the heat of the summer and the desolate desert. They’re mostly prickly—think horned toads, cacti, and scorpions—maybe it’s just me, but it makes very little sense for snails to have somehow survived out in Arizona basically ever. You can imagine my surprise, then, how every time it rains heavily (5+ inches in a week is a ridiculous amount of rain for us), my backyard patio is home to somewhere around ten living snails and a few empty snail shells. This sort of rain happened around New Year’s, and on the first day of the first month of the year of our lord two-thousand seventeen, my family and I decided to enjoy a nicely constructed fire in our fireplace.

It was dark and wet. Not like I could really see anything, what with my ancestors taking too much time deliberating over what traits to accept from the offerings of the Gods and being stuck without eyes—or legs… but I could feel it. The hardground was cold beneath me, and what little warmth lay in the air was being siphoned away by the moisture left over by the rain. I had crawled to safety from the softground and foodstalks when the water started making breathing difficult—besides, who wants to eat soggy foodstalks anyway?

So I, the Great and Formidible Salamenca, Youngest of the Snail Consortium, Most Fearless of the Great Shell Knights, ventured out onto the unforgiving, unending expanse of the hardground—the inconsistently defended Territory of the Mewling Furry Deathstalkers, from whence no other Knight had yet returned. Okay, so maybe I’m not actually on the Snail Consortium, and maybe I am the only Shell Knight, but I returned from that terrible place, didn’t I? YES, Gilbert, I am looking at YOU.

Anyway, there I was, stealthily crossing that bleak wasteland, when all of a sudden something blocked my path. It was hard and rough and… vertical. While it was similar to tree bark, this surreal surface stretched for what could be hundreds or even thousands of shell-lengths in either direction! I was just as amazed as you, to find something so strange in our world—and terrified by it. Surely the Gods would only put such a thing in this world to protect us from some great evil. As I stood, paralyzed with awe, I heard the approaching battle cries of the cruel Fuzzy Beasts—the sound broke the trance I was in, and I turned around to find my quiet tunnel once again.

But before I could make it any real distance, the night exploded in a fireball of light and the strange reverberations which I felt in the ground and the air, shortly followed by a set of rhythmic tremors passing quickly left to right behind me. I withdrew into my shell until the hardground stood still. After a moment more, to check—YES GILBERT, to check if the shockwaves came from the Furry Ones—I exited the safety of my shell to dash towards my home.

Only a little way back along the very same path I originally took out of the softground, a previously-unencountered obstacle blocked my path. The Gods must have chosen to help me in my quest, for they sent me tree bark. I crawled onto it, wary of the gnashing teeth of the Deathstalkers; though before a proper exploration could be made, the bark shot up from the ground, carrying me at such blinding speed that I was sure I would be ripped apart.

The terrifying journey eventually came to an end, and quick as I could I ran off that piece of bark—only to find myself back on the softground! I then came here to tell you all of the wonders the Gods have performed for me, and to regale you with my intense heroics. OH GO ASK YOUR WIFE, GILBERT, YOU SPIRAL-HEADED GROUND-MUNCHER.

tl;dr – I went outside on the night of New Year’s Day to get firewood from the back patio, and saw that the recent rains had driven the snails out onto the concrete again. Most of the shells were empty as far as I could tell—probably they were small playthings for the neighbourhood cats—but there was one that sort of cowered into its shell when I stepped out onto the concrete the first time. After three trips to get three different logs (a good fire-starter can start a fire with three logs, three pieces of paper, and a single match), I took a small bit of wood and put it directly in front of the snail so it could climb on top. I went back inside to start the fire, and once it was crackling satisfactorily I went outside and took the bit of wood (now with snail on top) and placed it in the grass, so it could go back to a place of food and safety. Then I told my mom about it and she told me to blog about it so I did. And now you’re reading it. And now you’re done with it, I think?

Gentlemen and Gentlewomen of the Vox Chaotica Council!

I don’t really do New Year’s Resolutions. They work for some people, sure, but I’m not a huge fan—and I’d be remiss if I didn’t clearly state that part of the problem was the forced resolutions in my elementary school (each year we had to write out what our resolutions were), and mine was always Better Penmanship because I couldn’t think of anything better. And if you could see my handwriting, you’d be able to tell how well that resolution ever worked out.

Also, I’m the kind of person that doesn’t do something just for the sake of doing it. I have to be passionate about an activity to do it, or even keep interested. So the idea of just making a resolution to do anything just because it’s *adopts that awfully nasal, piercing, stereotypical sorority-girl voice* “OhmyGOD A new Year A new MEEEE!!! YAAAAAAS!” has no appeal to me. [Editor’s Note: that honestly hurt my soul to type out. I am sorry, I apologise, and freaking WOULD SOMEONE CASH IN ONE OF THESE SO THE JOKE CAN END.] Better to just take a short time of thoughtful introspection and figure out what I actually want to do every week or two, and just start taking steps towards fixing the problems I find.

Like running. I was feeling a little fat when the summer was starting (March this year. ~Thanks, Arizona~), and let me tell you, Gymtimidation is a real thing for poor old Cutter, and I don’t really fit the same lifestyle as your typical gym-goer. Nutrition is on the same level of mystically incomprehensible as most medicinal science is for me, and the point of my workouts is to stay active rather than get swole; I just want to feel good about how I look and be able to maybe do a couple pull-ups to impress the ~ladies~ (because so often what an eligible bachelorette wants is a man who can do a small number of pull-ups on command). So I took a prepaid Visa card thingie I got for Christmas and used it to buy myself a pair of running shoes.

Then I went for a very short run like a week later—literally I was outside for fifteen minutes because I was dumb and just started actually running (faster than jogging and just slower than sprinting), having not done any real physical activity in almost a full year. Fun story: evidently, aside from filling out like the Pillsbury dough boy, when your body is inactive for a while, mucus builds up in your lungs and throat. This makes breathing difficult, something hard already because running naturally makes you short of breath—and then on top of that, there’s the involuntary reaction of coughing up all that phlegm because your body is so confused why you’d subject it to such torture.

But, after nearly coughing up my lung, I got back out there. I did a solid five months of running at least three times a week—until I sprained my ankle. And alas, I am also sometimes a human, so I may or may not have gotten back into this glorious exercise routine because I may or may not have just had too much mac-n-cheese during the holidays and just laid down until the feeling passed whenever I thought about running again. Maybe.

There was probably a point to me telling you all this, but I can’t remember it (the majority of this post was written like two weeks ago, and I never do outlines or notes for myself), so… I guess that’s all for now.

So out there and make change, yeah? The world is ripe for it, friends.

tl;dr – Basically Cutter just rambles a lot about running and how he doesn’t like New Year’s Resolutions. Honestly, you can probably just skip this one and read something better. 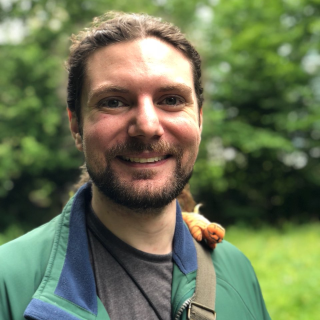 My name is Cutter. I'm a musician, writer, sailor, Britophile and vehement singer of whaling songs (rather, only the one). This is a humble asylum for my pet projects, and other odds and ends that would otherwise drift into the aether.